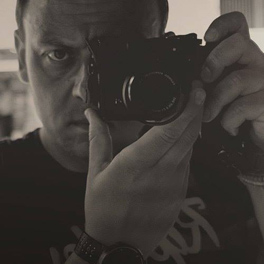 Always fascinated with people, their lives and emotions. Eager to grasp everyday images neglected by others and getting a new meaning in a photograph. Always trying to tell a story with every photo. Interested in capturing authentic situations appearing for a short moment in the everyday chaos. Attracted to street photography by its unpredictability and the feeling of almost complete invisibility in the crowd. Cherishing the past moments that have been successfully captured in a photo. Keen follower and explorer of the street art phenomenon. Fascinated with all types of artistic activity in urban space, including particularly street art.

Jazz culture is an object of his particularly strong artistic fascination. He has had an opportunity to photograph numerous artists from all over the world playing in clubs and on stages of many festivals. His photos express his affection for music and true admiration for the talent of the portrayed artists. He tries to grasp their energy, emotions, commitment and mastery.

Taking photos, he searches for authenticity and spontaneity. Resents staging and artificial light of a flash.

Apart from photography, he is active in the field of graphic design. He is a founder and owner of a small but dynamic ARTGRUPA interactive agency operating since 1999. He is involved in web layout design, graphic design and corporate identity design. Since its foundation, the agency has been focusing on the interactive marketing services and multimedia solutions for small and medium enterprises.

He is an author and developer of the Dawny Kalisz (Old Kalisz) website (continuously active since 1997), devoted to the history of his hometown. In 2007, Przemek Wozny was granted a title of an Honorary Friend of the City of Kalisz by the Mayor of Kalisz.